October 3rd and October 4th had 2 tournaments for me. First, on Saturday in Düsseldorf, using Swedish rules with Open Reprints and a mainly ‘Old Swedish Guard’ crew. Afterwards on Sunday, with more local players that are newer to Oldschool. Then with Atlantic Rules and again Open Reprints.

I played the Poison deck you see above and reached all goals that I set for it.

It won a match!

The one advantage over Ernham Djinn is Marsh Viper’s LOW power. It becomes unblockable with Dwarven Warriors and Tawno’s Wand, while Ernham Djinn (or other fatties) don’t. If I want to keep playing with Poison, and potentially even improve this deck, I think abusing the broad low power of the creatures is the way to go. Tawno’s Wand and Dwarven Warrior might work well with more Florel Spuzzem or, when played with Fallen Empires, work well with Mindstab Thrull, Farrel’s Zealots, Necrite or in the right matchup, with Merchant Ship. And let’s not forget Murk Dwellers!

Now, if even more “bad” creatures are put into the deck, it’ll lack “even more” removal. At the moment, it’s already without Lightning Bolts. Fitting in more creatures might make the removal amount too low to be relevant, so a wider way to deal with big creatures can be used. For that, I want to try Meekstone in the next events.

Ultimately, the ceiling now is to win two matches in the same tournaments instead of just one. On the horizon, there’s another local event (20.12.2020 or 27.12.2020) and the next Hanseatic Oldschool XI in Hamburg. If Merchant Ship can do “something” in here, I might even try to make that work until the Hanseatic Merchant Ship Cup.

As the first registrations for Alpha Castle 2020 came in, some cards were banned by Wizards of the Coast because of potentially offending content in artwork and/or flavor.
WotC bannings don’t directly affect the usually non-WotC- sanctioned community of Oldschool.

Reading through all the chats popping up everywhere about the topic, I pondered about banning all those cards at Alpha Castle, banning some, allowing mechanical proxies / alterations, or making no statement at all.

It is my goal to make the events as inclusive to everyone as possible. It was my goal from the start, always running and soliciting open reprints (and FE). A majority of OS players isn’t offended by Crusade, Stone-Throwing Devils, Imprison, and other cards recently banned by Wizards of the Coast. But inclusivity isn’t about the majority (See education explanations at https://twitter.com/MerfolkMagic).
For Alpha Castle 2020, all I ask you is to think about the issue some images, in context with the cards’ other text, published by WotC in 93/94 create to some people. If at the end of that thought process, you feel you want to play a card but also want to make a statement like “there exist cards that maybe shouldn’t have been printed”, feel free to play a 5th or 6th Edition reprint with more appropriate pictures, or even a thin print of one of a mechanical reprints. Some ideas can be found at https://twitter.com/writingjay/status/1271792773289697281 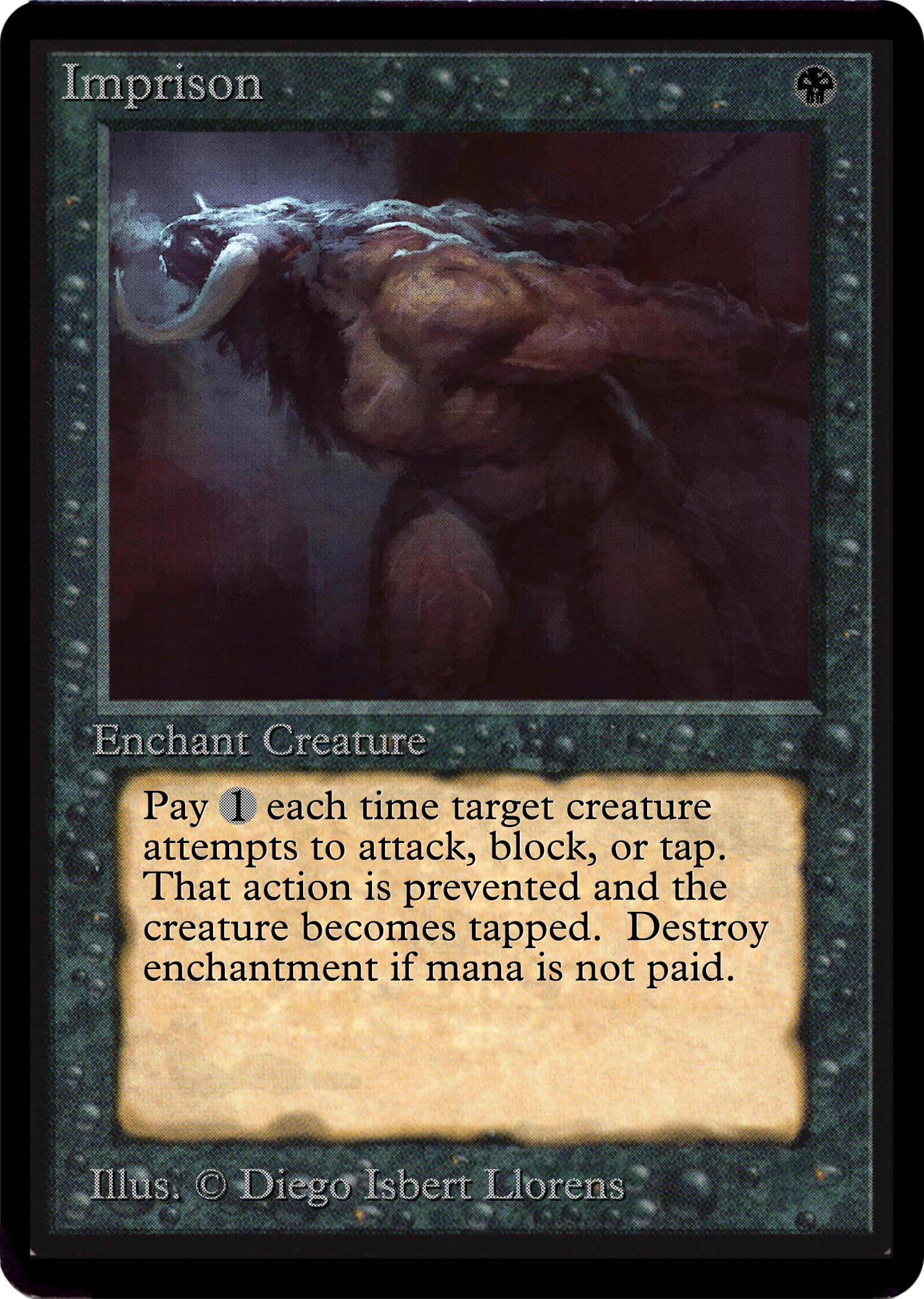 Tldr:
At at all Oldschool events I visited, the overall consensus is “Whatever sizzles your bacon.” or “Whatever tickles your fancy”. At Alpha Castle: If you wanna play your Alpha Crusade or got to play that Cleanse in Sideboard, go for it. if someone else prefers a 5th Crusade or a heavily altered Stone-Throwing Devil, that will be okay too.

The title says it all. You can now preregister for Alpha Castle 2020 on August 16th.

15. Apr 2020 Philip Böhm
Update for Alpha Castle 2020:
I still plan to run it in August, but I want more flexible cancellation options with the castle before I open registrations. That way, I can also reimburse paid registrations better, in case of travel and event restrictions.
I know we all yearn to play an event, go out again, but at this moment flexibility for both me as TO (with a contract with the castle) and for you as participants (who may feel staying at home is healthier for you or the other players) is my priority.

Online Tournament without Webcam, we use Cockatrice instead.

Ruleset will be Swedish Oldschool 93/94.

We will play Swiss pairings,
depending on number of participants with a cut to Top4 or Top8.

Participation: Free, you don’t even need cards to bring!

Prize: I will paint an OS Magic card artwork of winners’ choice on canvas and ship it worldwide. (up to shipping of 15€)

Cockatrice doesn’t have the Magic rules built-in, but I’m around to help out with any questions. Cockatrice has a feature that allows spectators for matches.

FAQ:
Why not Webcam? There’s plenty of options for that already
Do I need this “cockatrice”? Yes
Is cockatrice easy? Installing it may seem confusing at first. The handling is intuitive for most, but I recommend 2-3 practice games to familiarize yourself with the software 😉
How do Fallen Star/Chaos Orb work online? For now, Chaos Orb will always hit and Fallen Star will hit one D6 -1 targets. 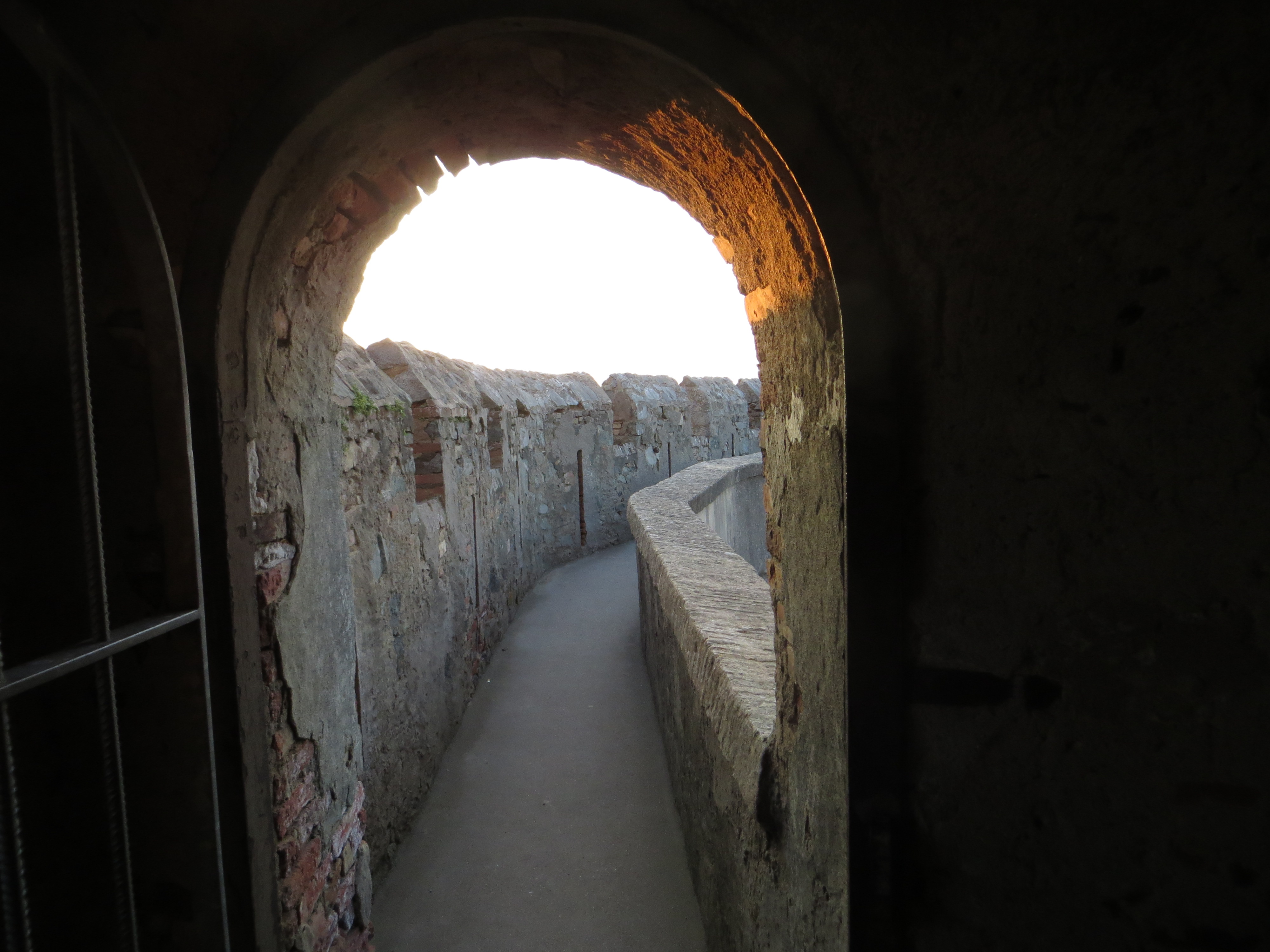 Preregistration for both starts End of March

Sorted roughly by Standings after Swiss! 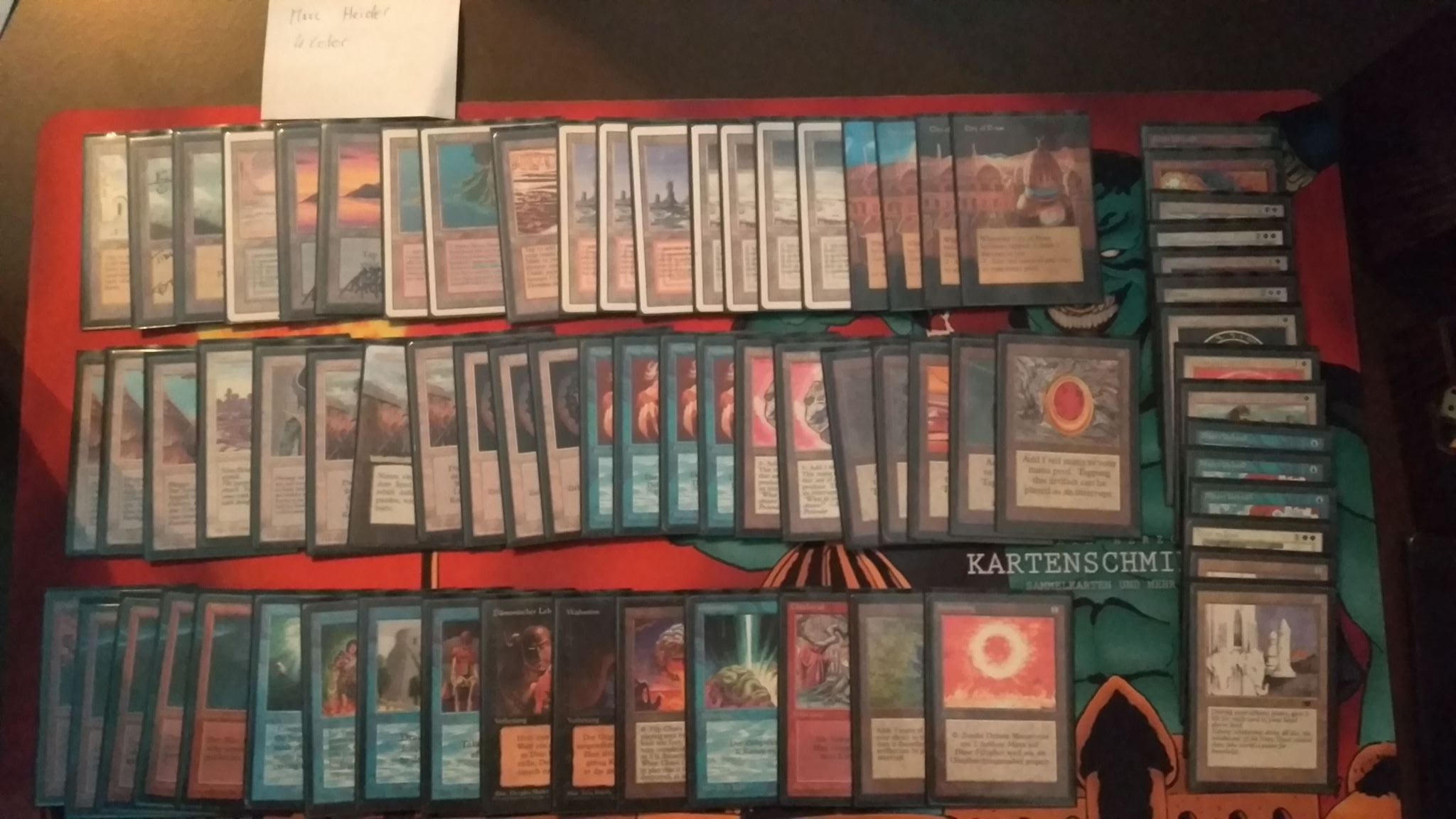 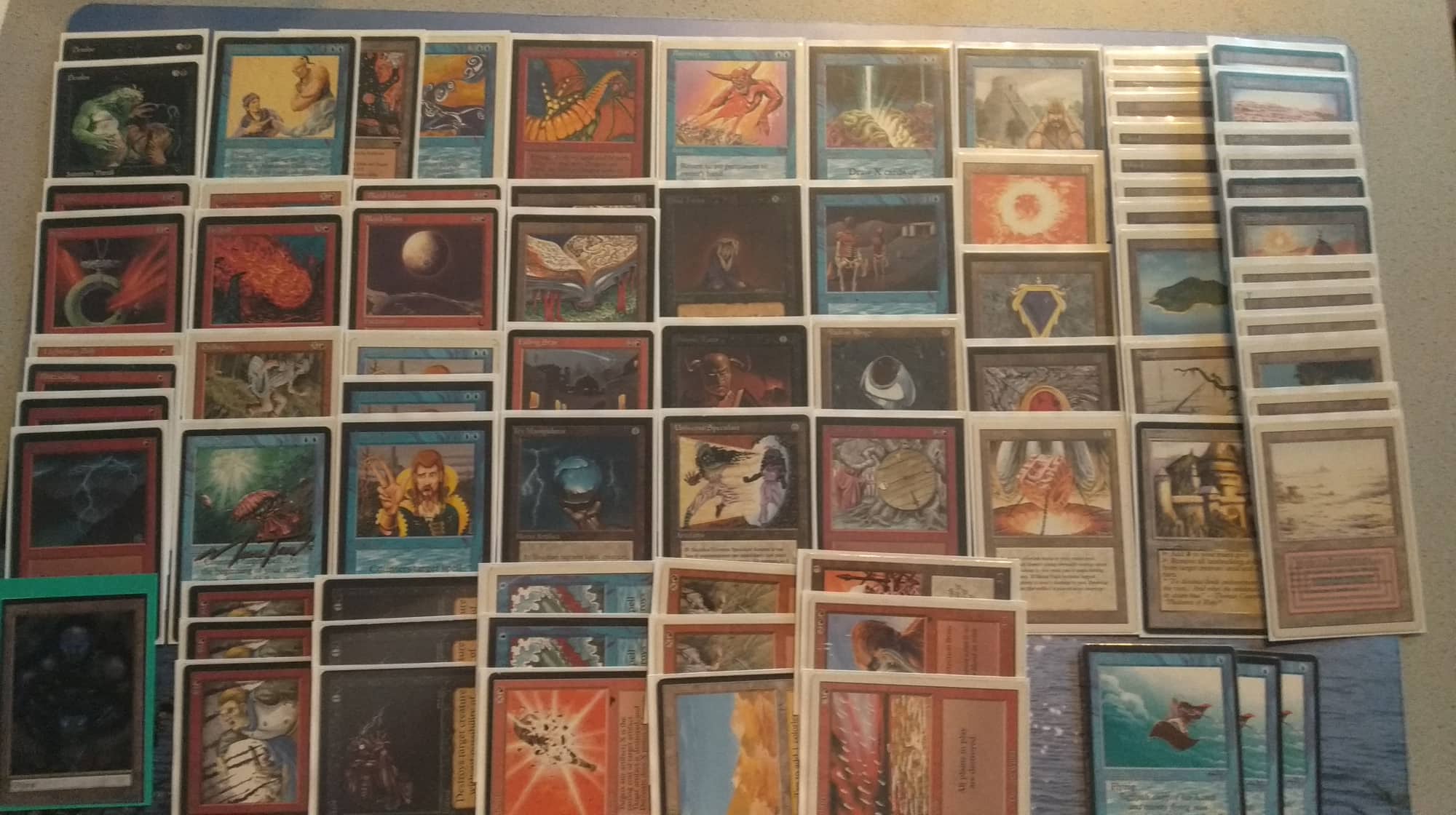 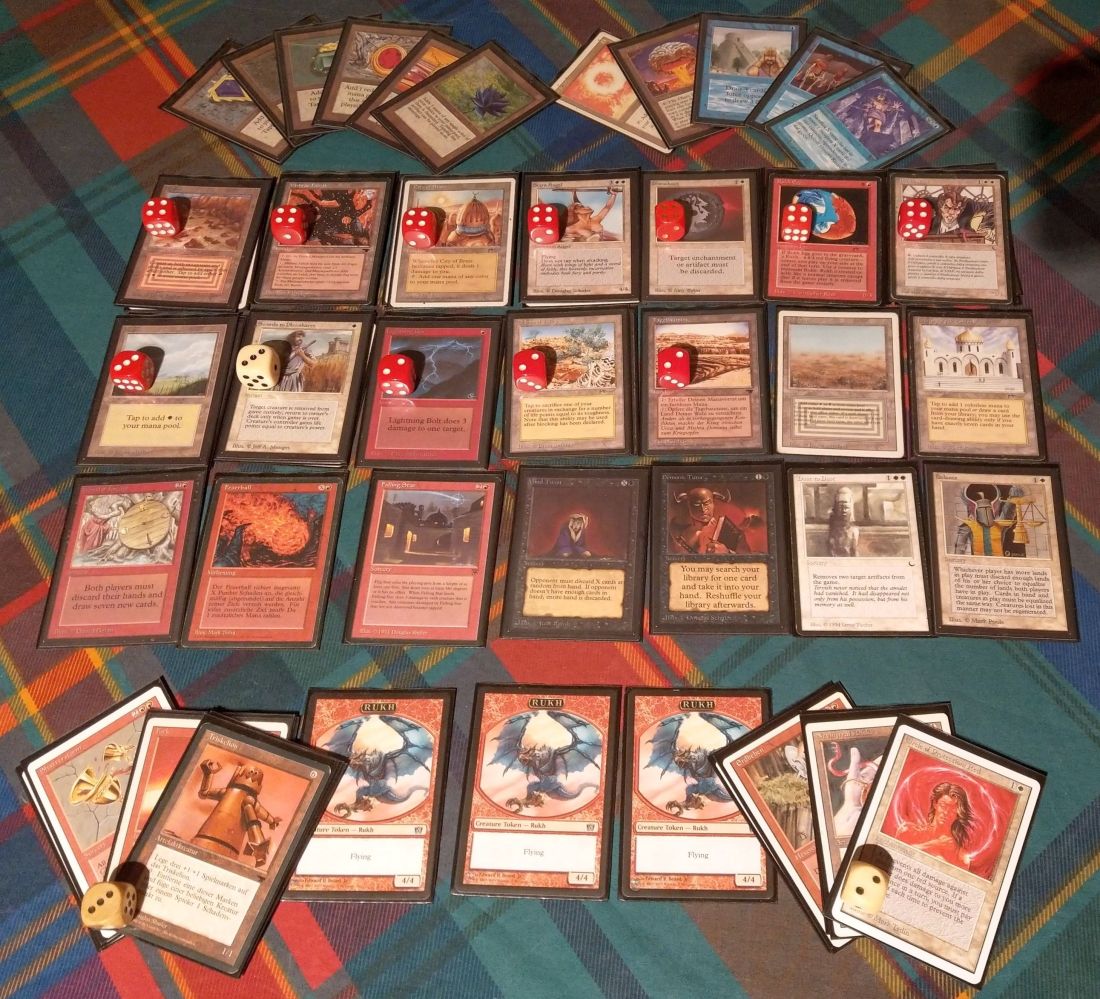 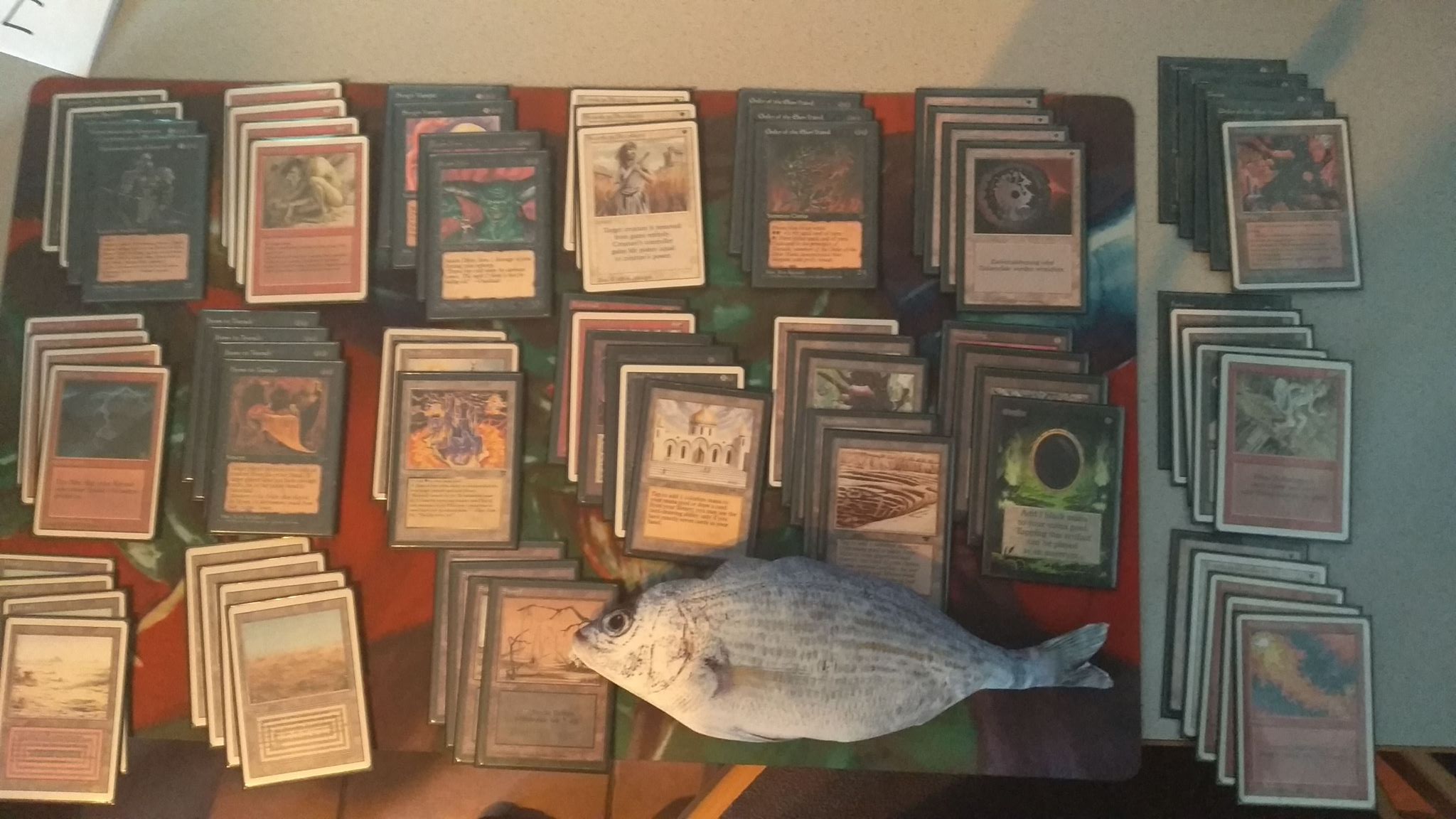 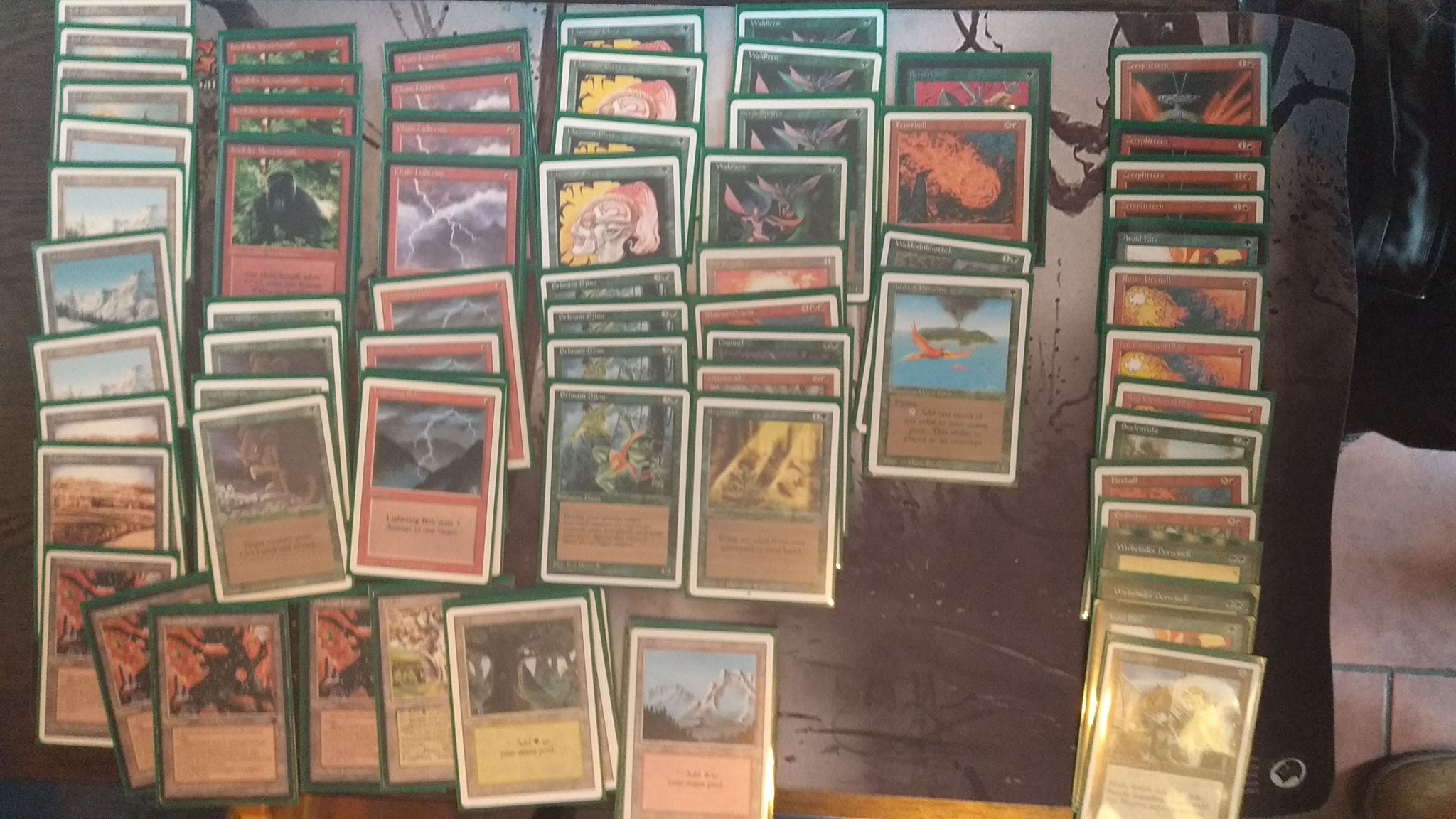 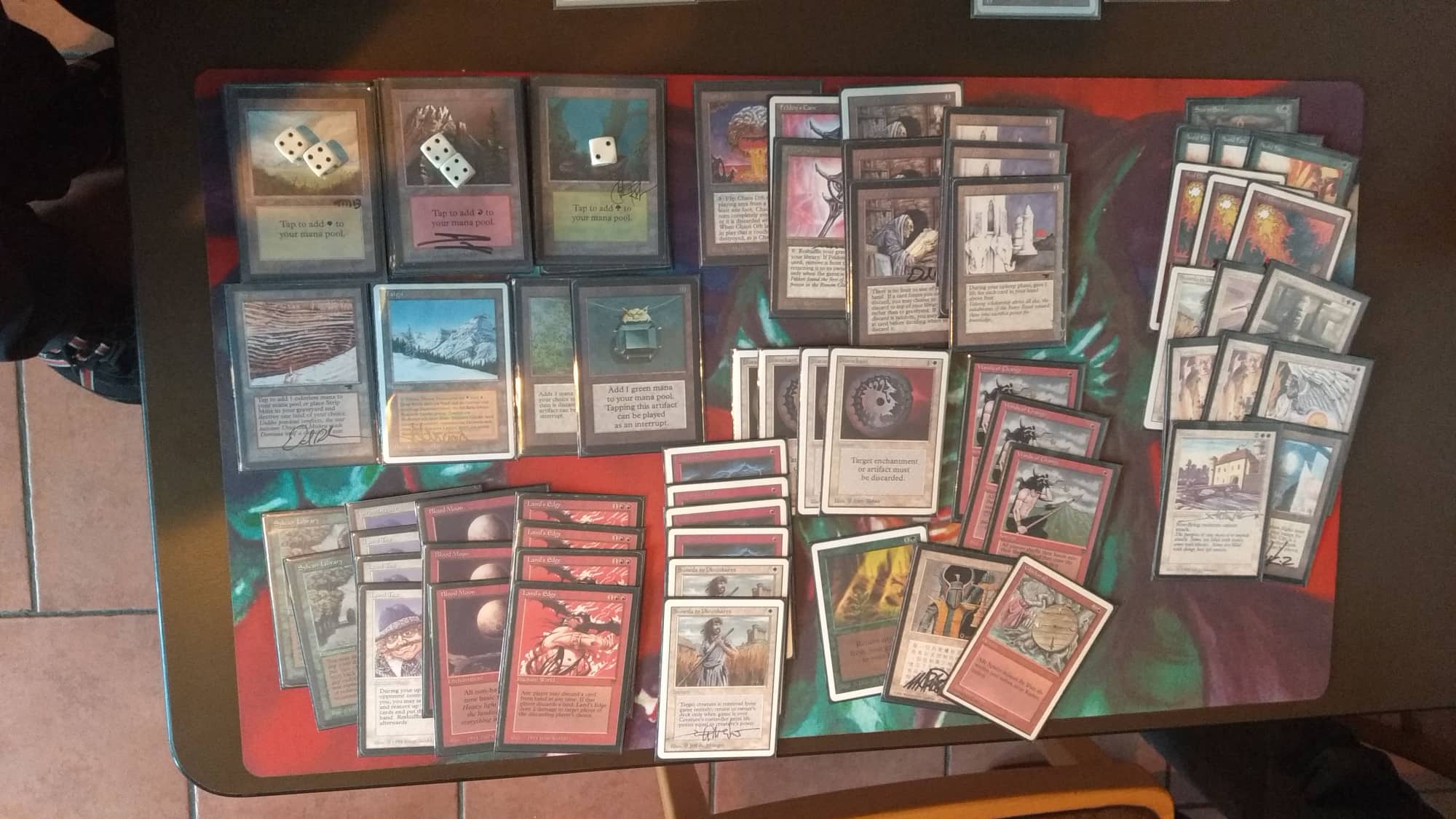 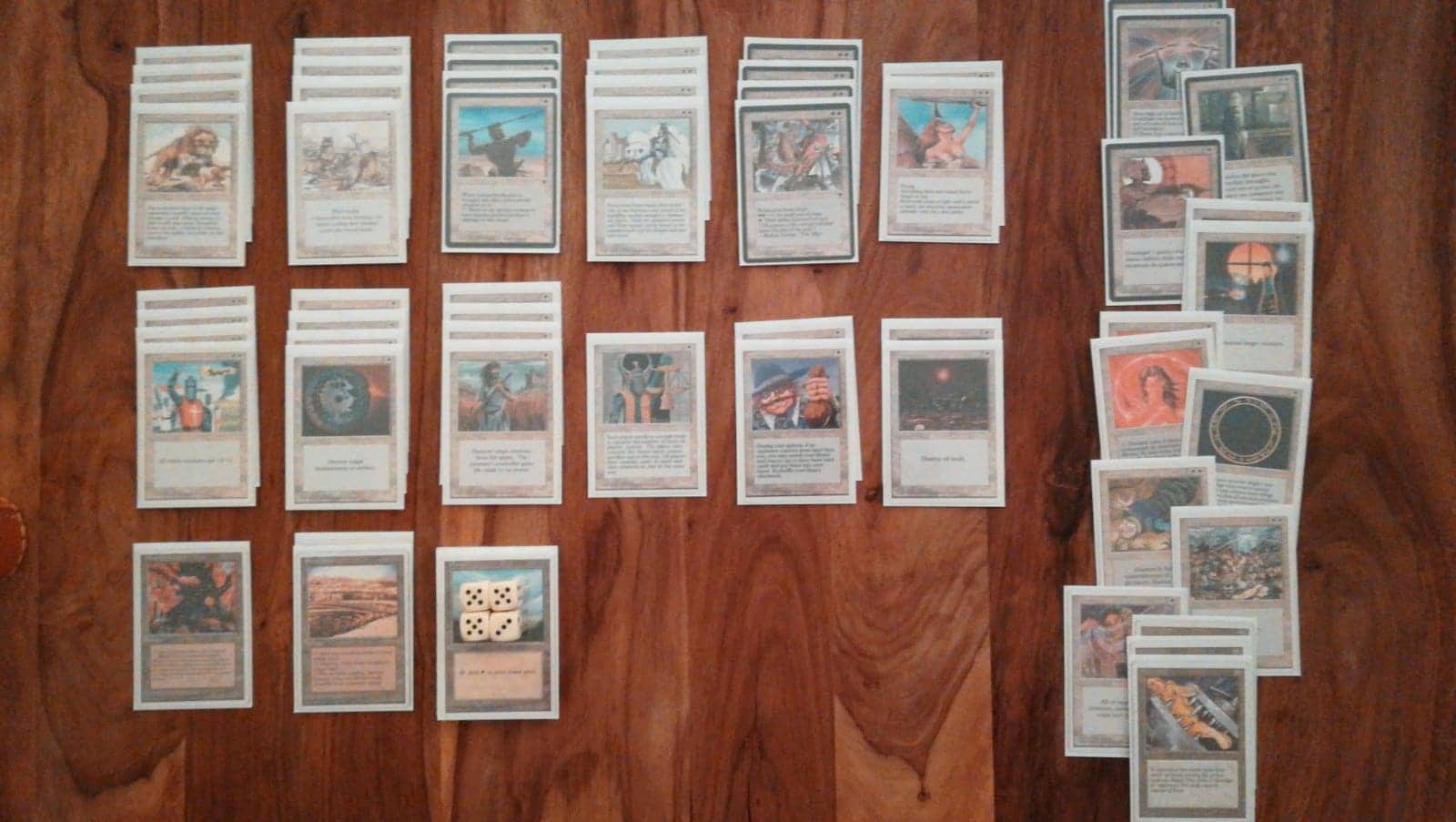 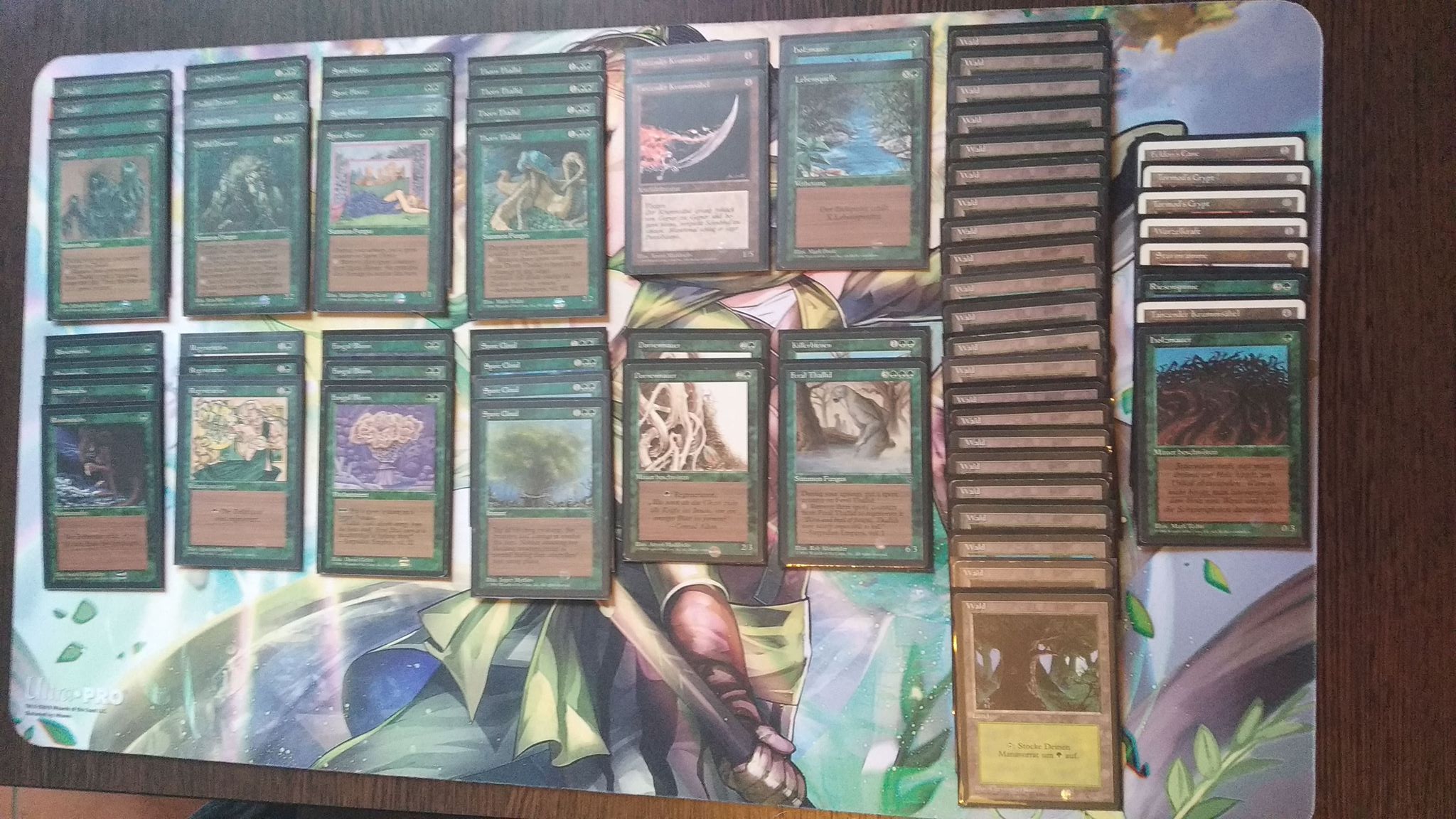 We played 5 rounds Swiss using at most 2 Strip Mines as a test. Again, several players who show up played their very first, but not their last Oldschool event. All decklists follow tomorrow in the next blogpost.

Until Alphacastle 2020 in August, there will be some more smaller meetups like this, but the next date isn’t set yet. 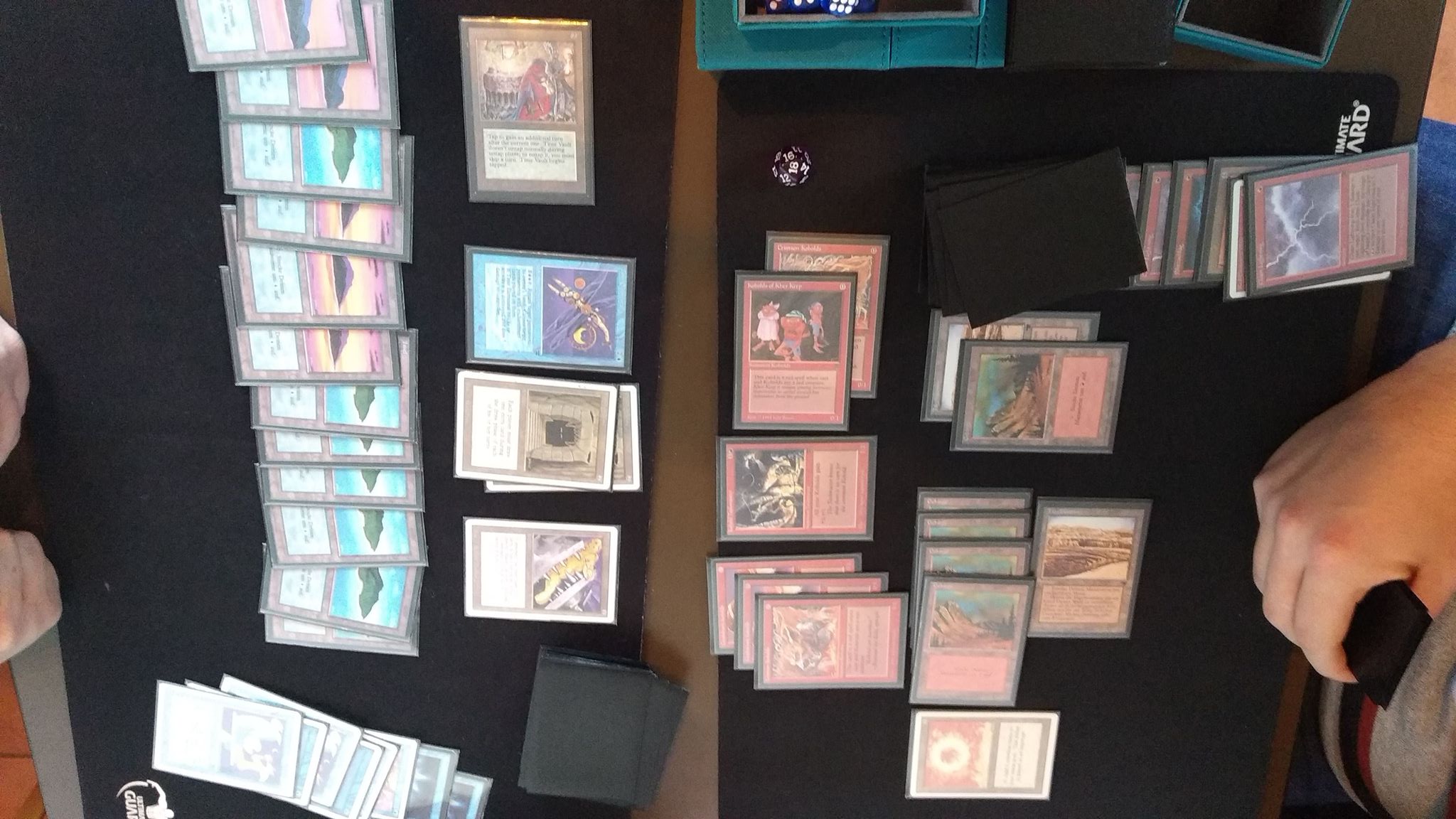 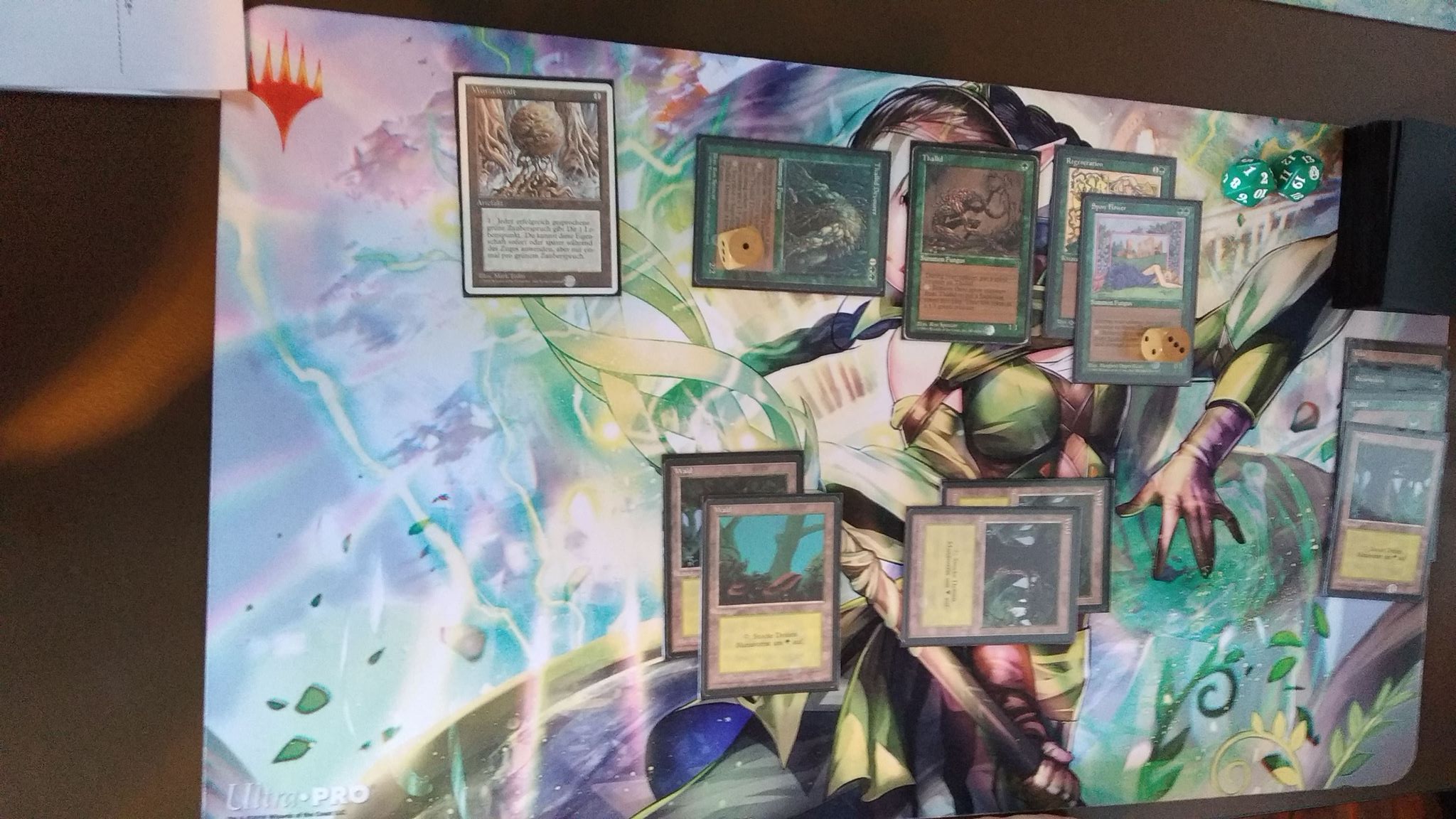 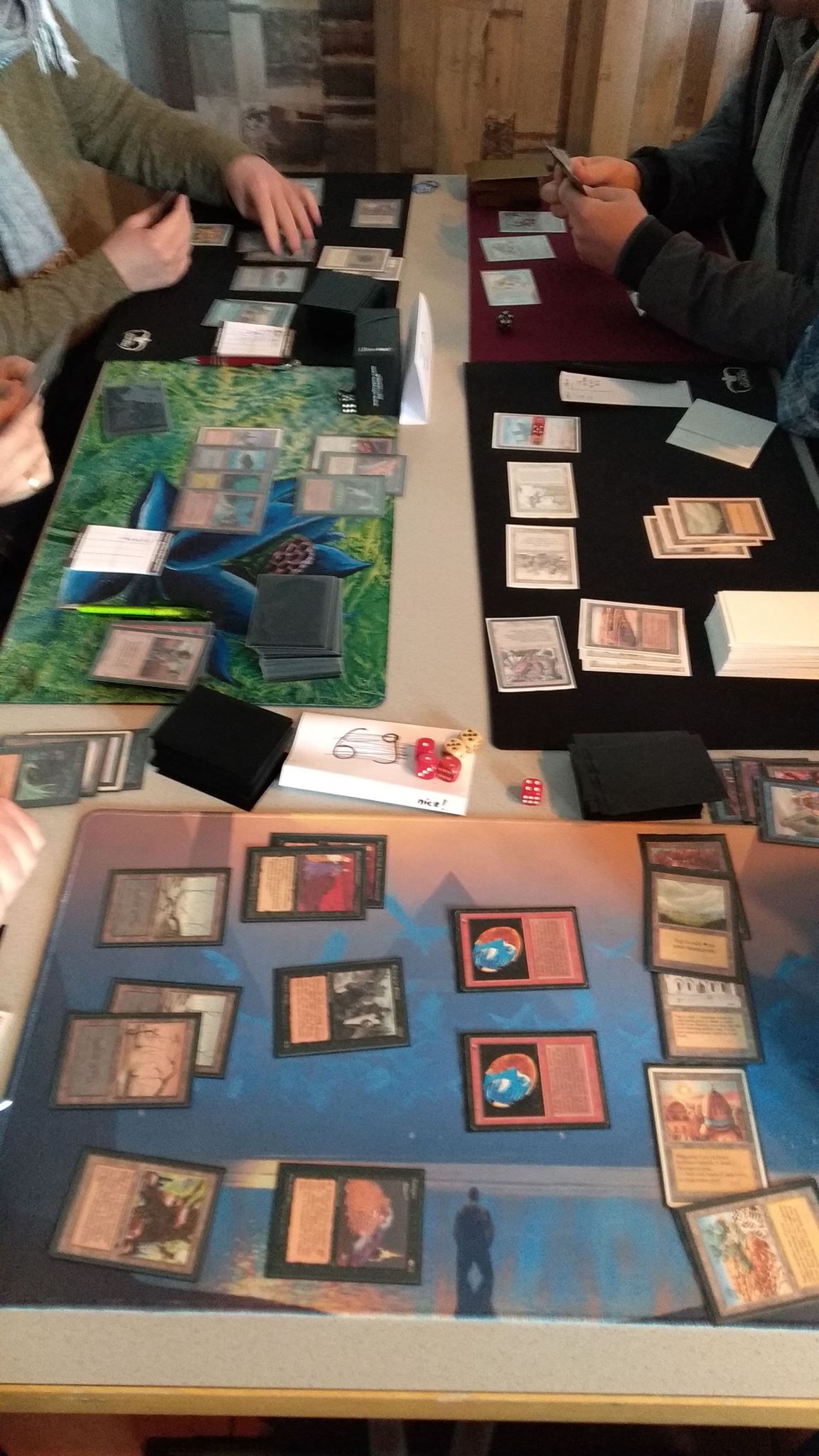 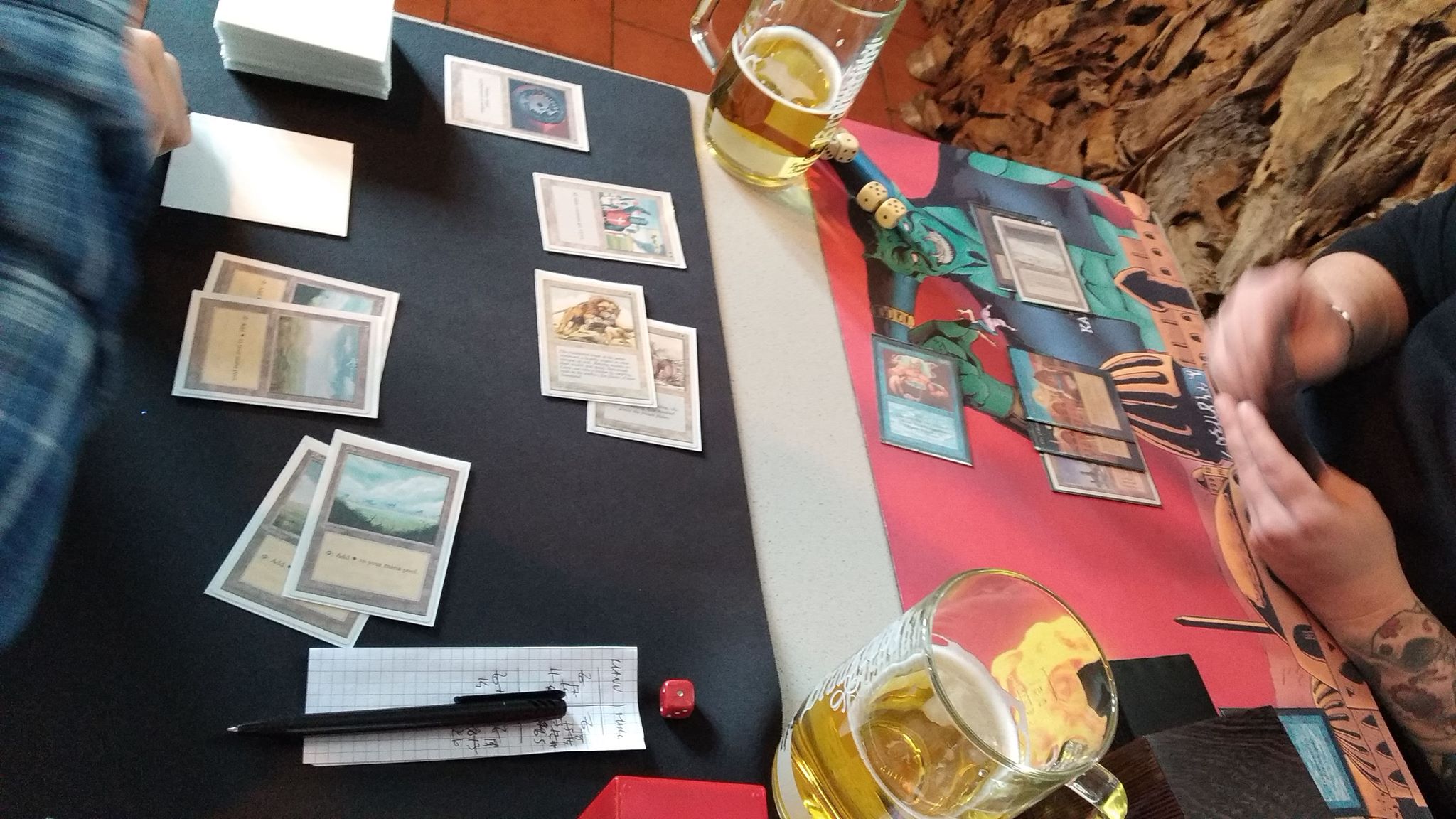 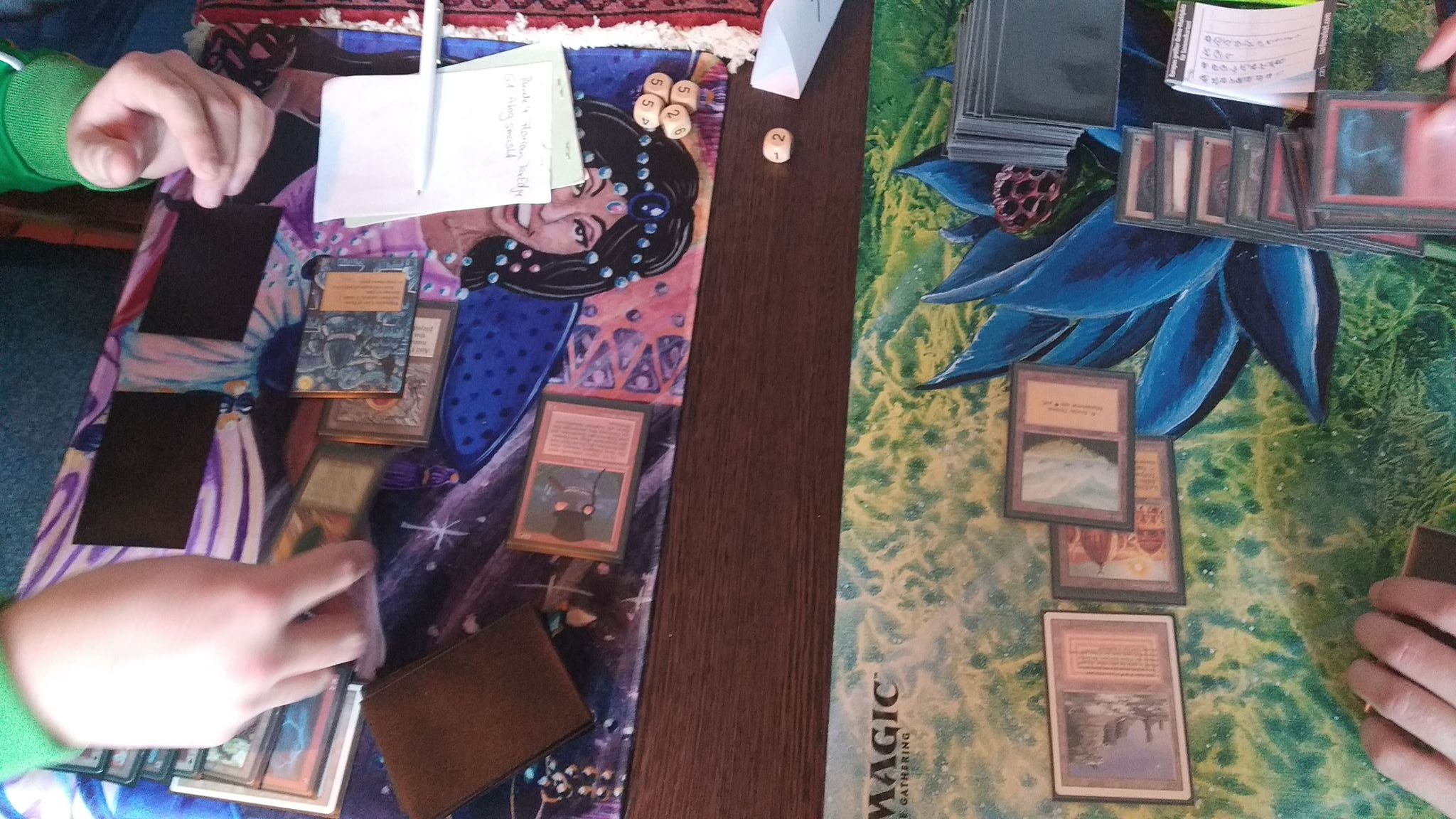 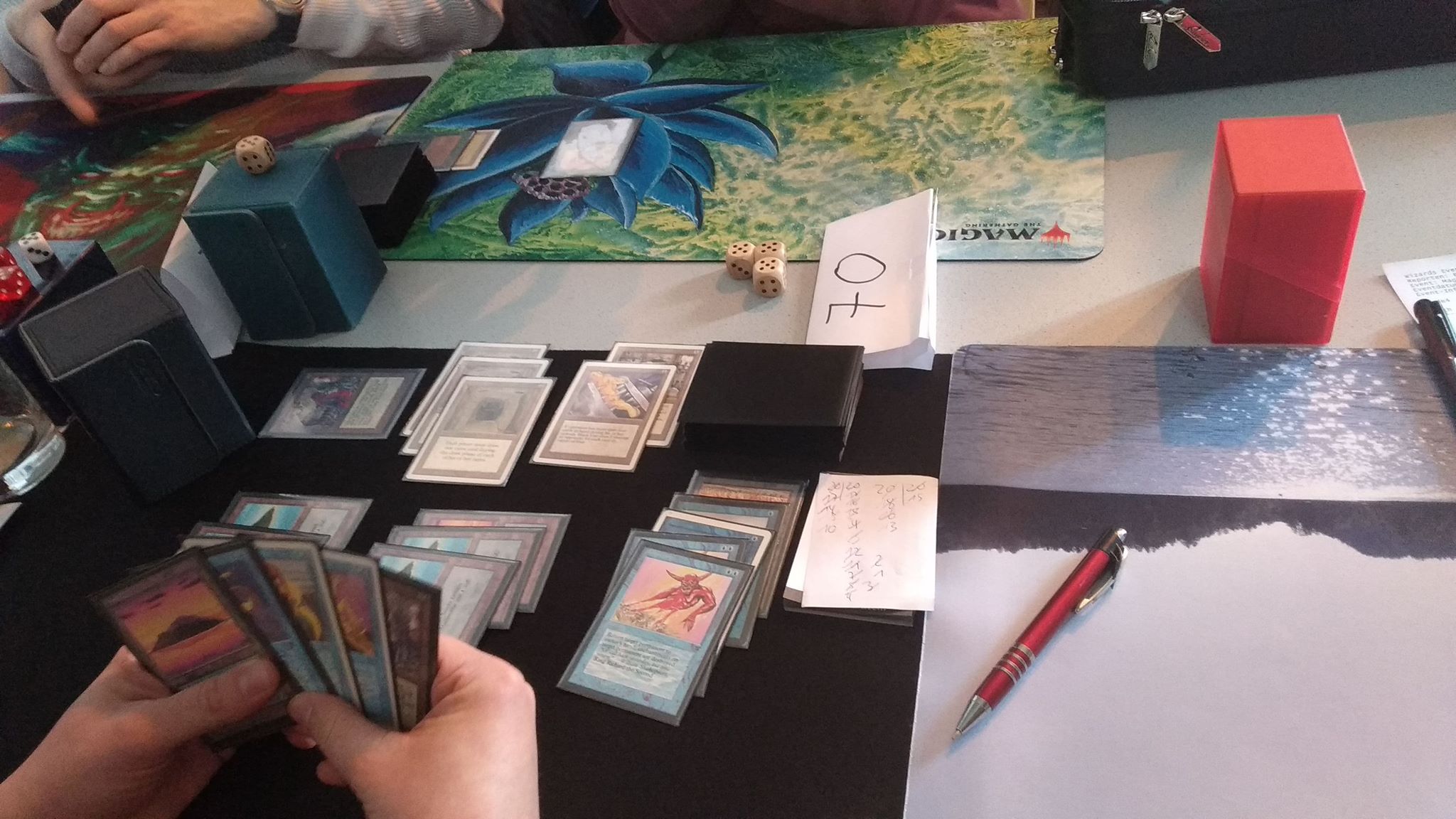 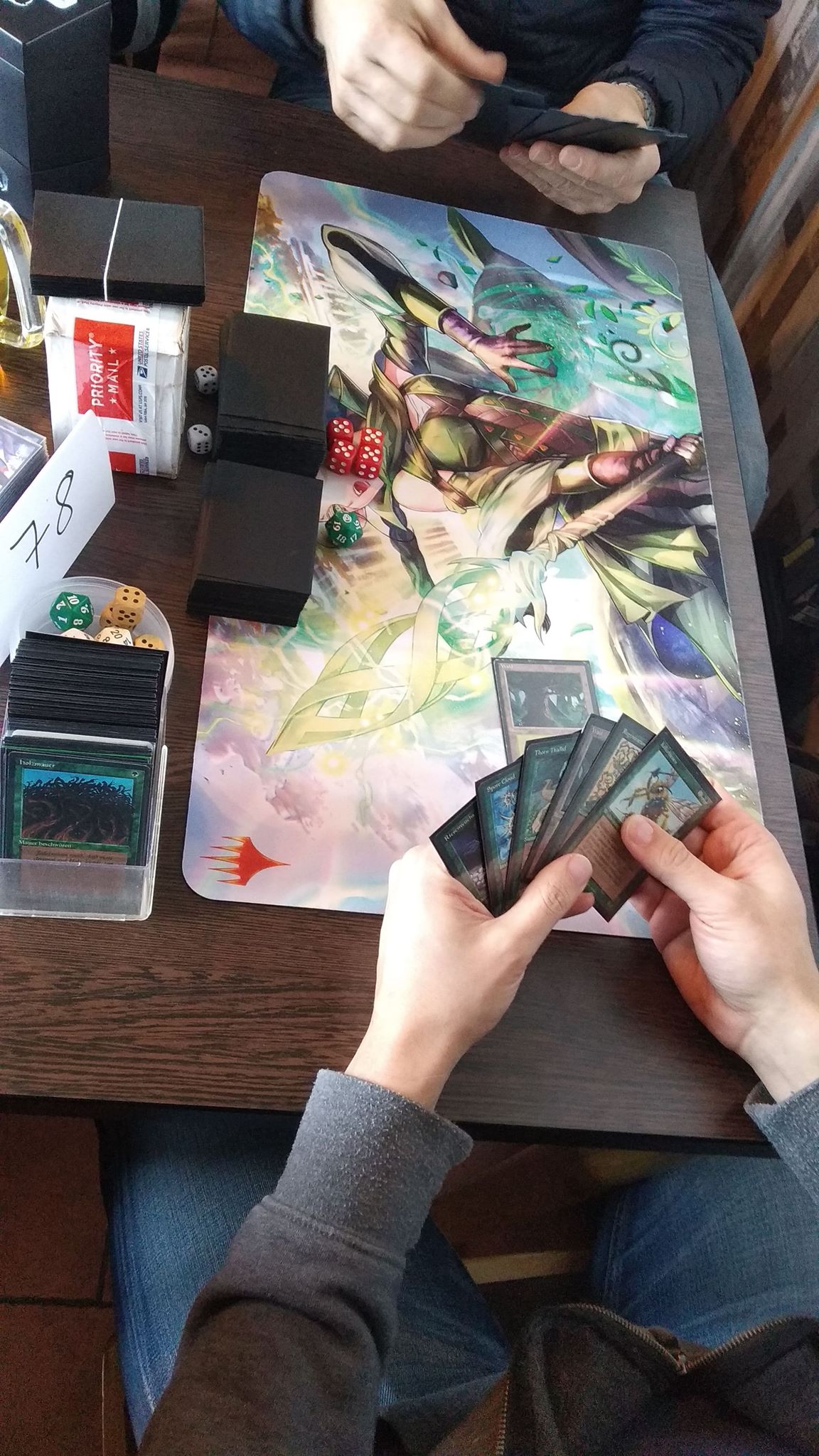 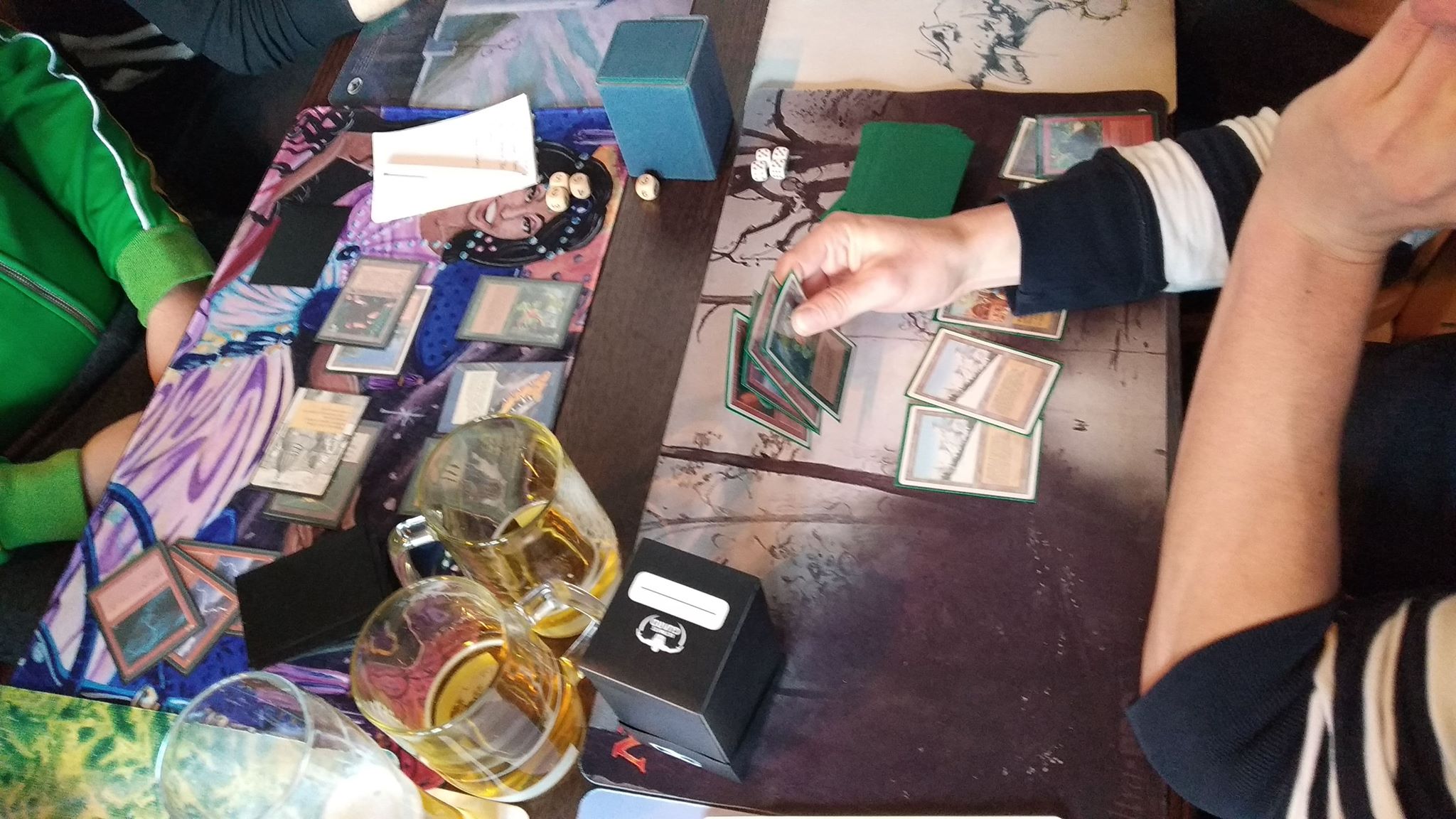 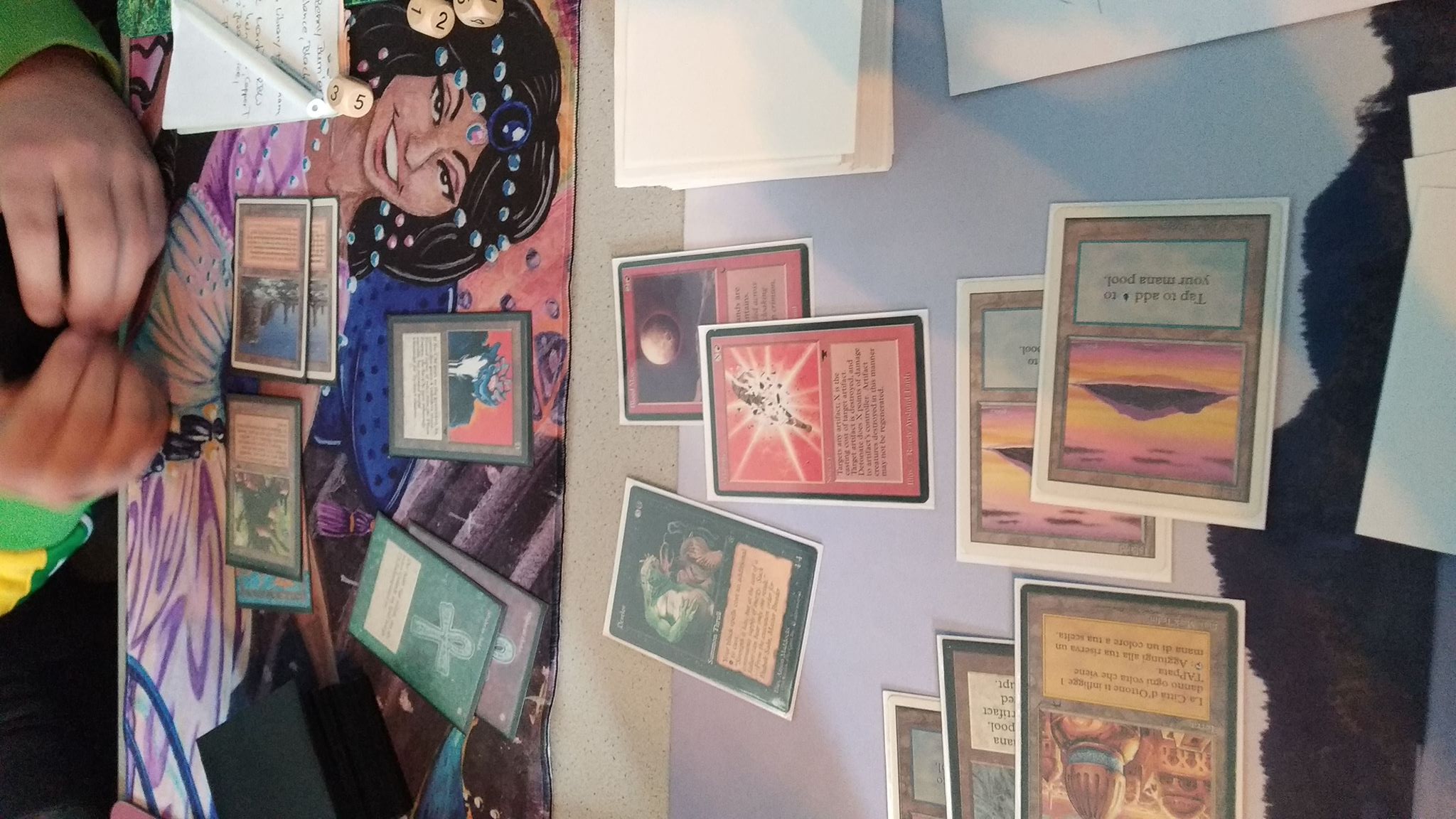 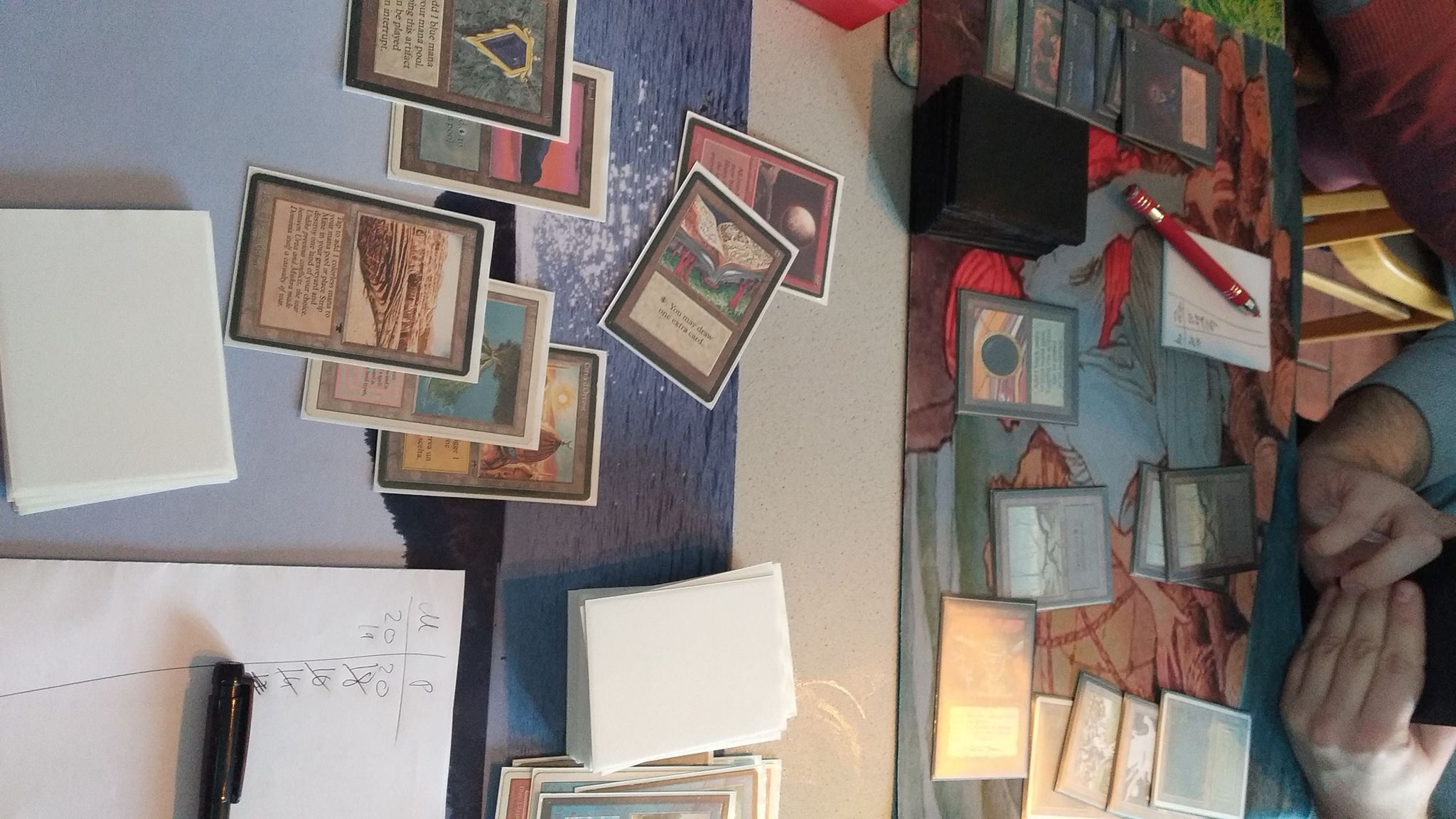 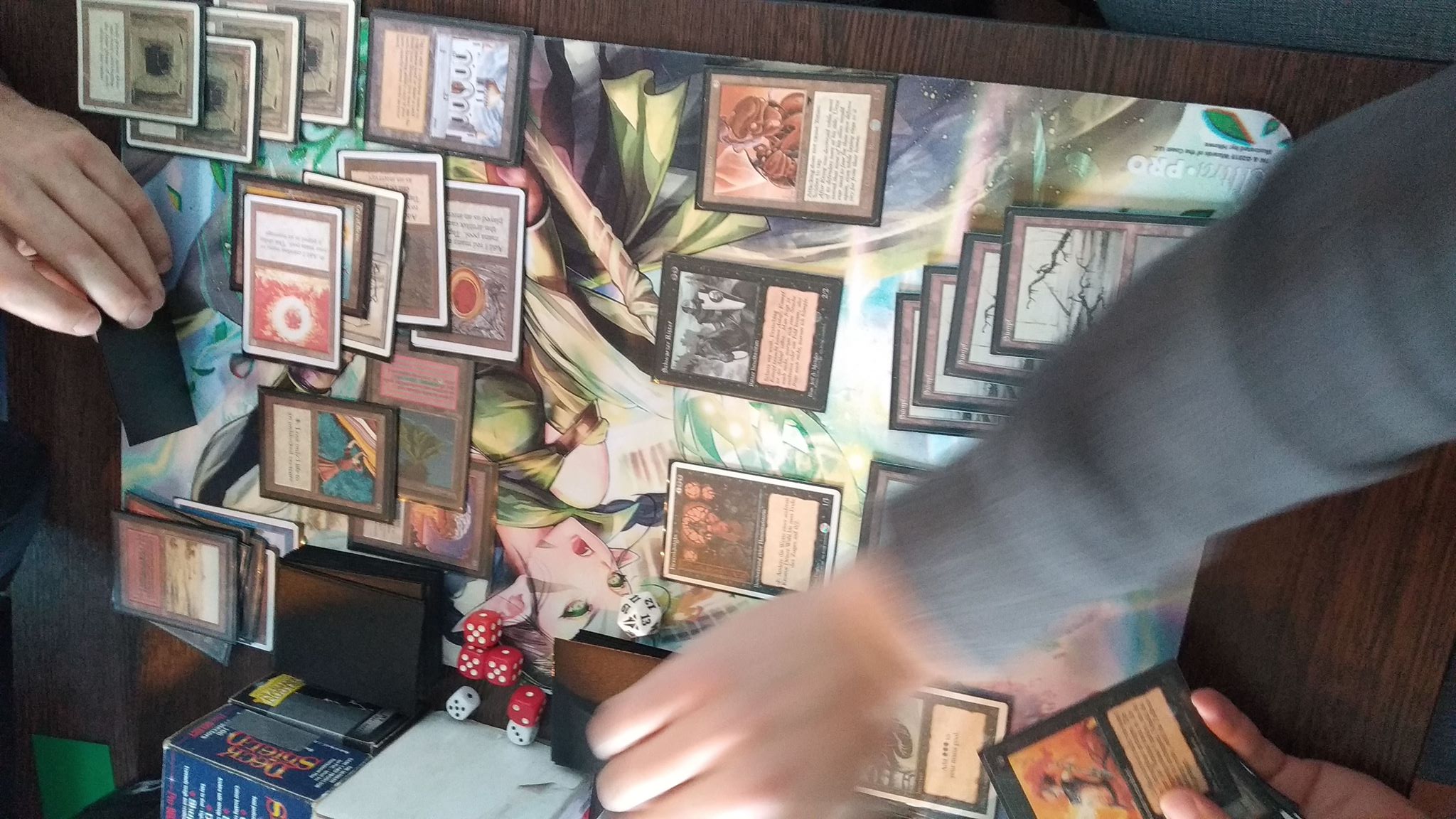 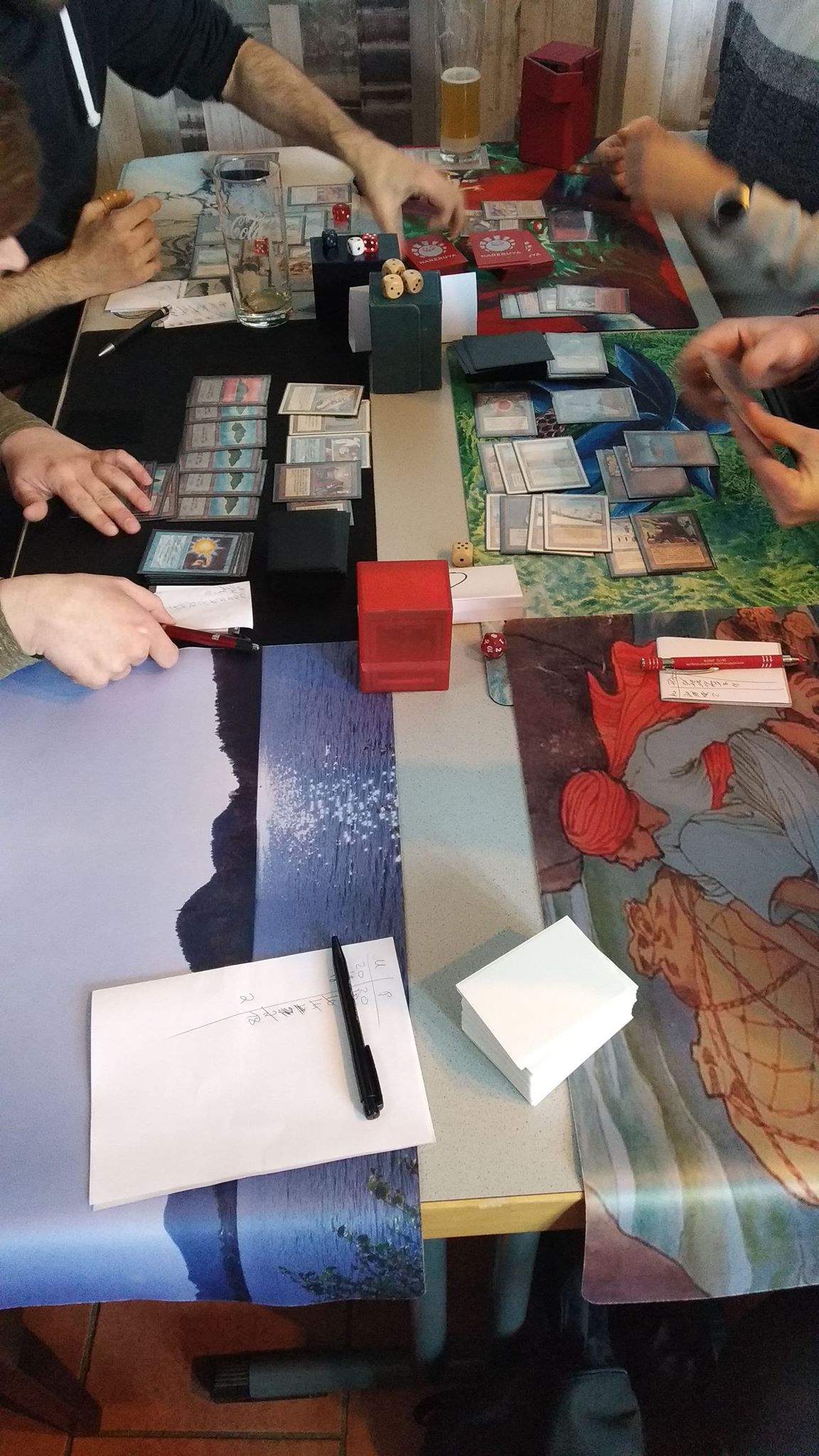 Every player will receive a package of Revised/4th cards to use in place of ante bets. At the end of the event, the player with. For example most revised Raise Dead will win this beta Raise Dead.

You can accumulate ante by winning matches and increase the stakes by playing ante cards. If you’re out of ante cards, you’ll get basiclands for a second chance. To win one of the beta basics.